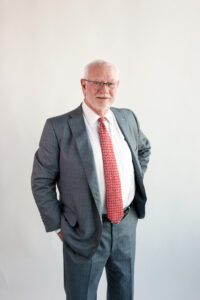 The Silver Medal is given to an AAF Nebraska member who has achieved success in his or her career, has shown a consistently high degree of creative and original thinking in work endeavors, has strived to increase the stature and raise the standards of the advertising profession and has been active in civic groups, including AAF Nebraska itself.

Smith is an award-winning storyteller and journalist, he spent nearly a decade creating compelling, emotional stories as a reporter at The Sun Newspapers of Omaha and the Omaha World-Herald. Smith and his team of four other journalists were awarded the Pulitzer Prize for Investigative Journalism in 1972.

In 1983 Smith, alongside Pat Ervin, founded Ervin & Smith. Today, Ervin & Smith continues to benefit from the strong foundation he built in the 80’s and has been recognized for its outstanding work, community and industry leadership and workplace culture.

Smith has an unquestionable love for the Omaha community and creative industry overall. He has served on many community boards such as the Elmwood-Murdock School Board, Goodwill Industries, Boy Scouts of America, and is a consultant for AfrOmaha and AfroFest. Smith continues to support AAF Nebraska through his team’s membership and their support of AAF Nebraska programming.

The 2023 American Advertising Awards | Creative Nebraska show will be held on Friday, February 10, 2023, at the SAC Museum in Ashland, Nebraska. Tickets are available at www.creativenebraska.org. Join us to honor Doug Smith and celebrate “Creative Nebraska” winners.

With more than three hundred professional and student members, the American Advertising Federation Nebraska (AAF Nebraska) is the unifying voice for advertising in the Omaha/Council Bluffs metropolitan area. AAF Nebraska offers an organization to educate, inspire and bring an inclusive sense of community to the advertising professionals of Nebraska so that the, and future generations, can continue to do the work they love.

Founded in 1983, Ervin & Smith is a marketing firm in Omaha, Neb. that specializes in solving complex business problems with results-driven strategies, media, creative campaigns and brand design. The award-winning agency has been recognized by Ad Age as one of the top 10 best places to work in Advertising and Media and by Entrepreneur magazine as a Top Culture. For more information, visit ervinandsmith.com.